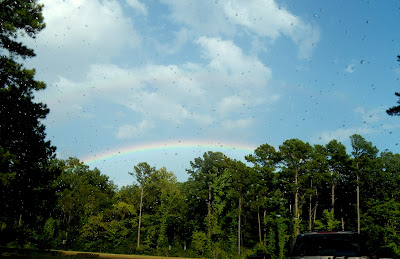 At least something good has come out of all the rain we've had lately! This rainbow was a real beauty, fully stretched out over the horizon.

Email ThisBlogThis!Share to TwitterShare to FacebookShare to Pinterest
Labels: Skywatch 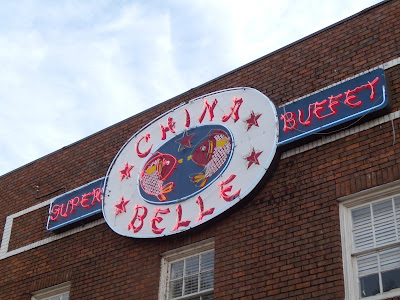 I've never eaten at the China Belle, but the sign is pretty neat. My photo doesn't really do it justice, I should probably try to get a night shot so you can see the flashing fish. We rehearsed a few nights at Broadmeadow Methodist church last week. I got there a bit early and wandered around before heading inside. I found this angel inside the courtyard and I thought it made a nice night shot.
Posted by Halcyon at 9/23/2009 06:19:00 AM 10 comments: 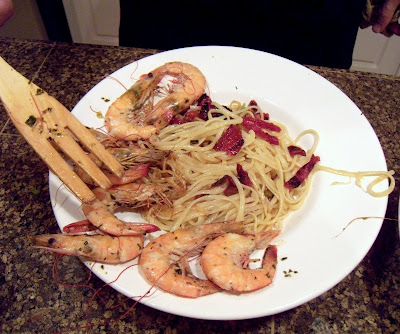 My husband surprised me this weekend with a wonderful dinner of fresh gulf shrimp and some delicious pasta.
Posted by Halcyon at 9/22/2009 06:13:00 AM 10 comments:

The Shape of Things 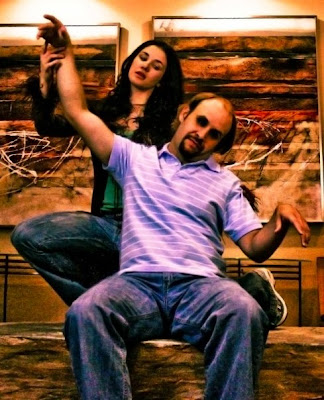 To continue on my theater theme, this is the publicity photo we've released for the upcoming show. I really like the effect that they used on it. These are the two "main" characters Evelyn and Adam - although it's really an ensemble cast.

Here's the official description of the show: "After a chance meeting in a museum, Evelyn, a sexy, aggressive artist, and Adam, a shy, insecure student, become embroiled in an intense affair. Before long, it veers into the kind of dangerous, seductive territory that LaBute does best, as Adam, under Evelyn's steady influence, goes to unimaginable lengths to improve his appearance and character. Only in the final and shocking exhibitiion, which challenges our most deeply entrenched ideas about art and love, does Evelyn reveal her true intentions." 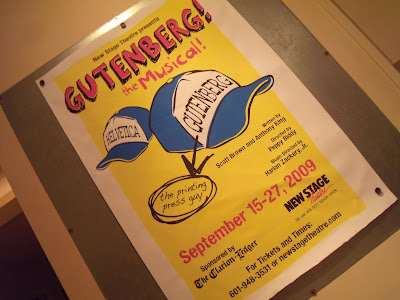 I had never heard of Gutenberg, the Musical before New Stage put it on their current season line-up. My husband and I are going to see it next Saturday, but I've already heard that it's delightfully funny.

Gutenberg is the season opener for the Main Stage series. This year I decided to purchase season tickets, I figure if there's a show I can't see one of my friends will surely be happy to take the extras off my hands.
Posted by Halcyon at 9/20/2009 08:42:00 AM 3 comments: